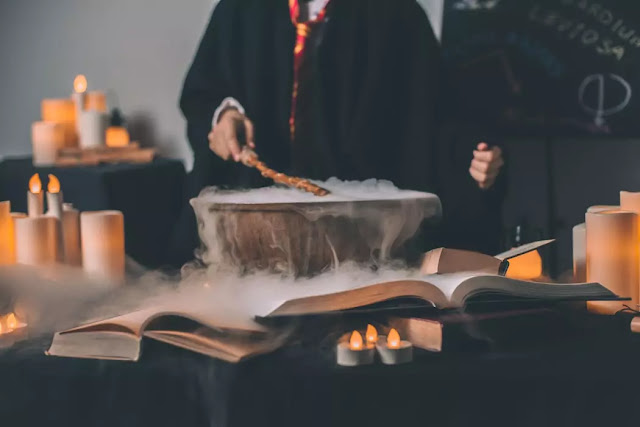 Over the past years , The Harry Potter Series has developed from a cute young-adult adventure into a well-written tale with some serious lessons for both young and old adults.Here are just a few of the lessons that I came up with after finishing the latest, and last, installment in this series.

[Spoiler’s Note: While I have attempted to avoid giving away too much, there is some information in this list that might spoil the ending for you if you have not already finished Harry Potter and the Deathly Hallows Book.]

When faced with a personal challenge, whether internal or external, it is much easier to move through it with support and assistance. The Beatles knew this when they sang “I get by with a little help from my friends.” Tolkien knew that Frodo could not accomplish his task alone. So he had Samwise risk his life to make sure Frodo would not be alone on his journey into Mordor. J.K. Rowling knew this when she put Hermione and Ron on the job with Harry. We all need support, especially when the challenge we face is one that tests us, stretches us and pushes us to the very edge of our comfort zone and beyond.

2. Ultimately You Must Do It Alone.

No, this isn’t a contradiction. We absolutely need support. However, ultimately, we are the only ones who can take the step to growth. Having strong support can lead us to the lake, but we have to reach down and get the water ourselves. Again, Tolkien and Rowling had it right when they recognized that at some point (or several points) on the journey their heroes would have to be on their own, forced to choose for themselves and take those difficult steps on their own. So it is for us in our personal growth. We can be supported, encouraged, guided and mentored, but ultimately we are the only ones who can choose and take the actions.

3. Acknowledging Your Weaknesses Can Be More Important Than Increasing Your Strengths.

Voldemort’s downfall was his unwillingness to acknowledge his weaknesses. He was convinced that by increasing his power he would be able to overcome anything and everyone. Ultimately it was his inability to see his weakness that led to his end. While focusing exclusively on our weaknesses is not healthy or helpful, ignoring them is equally foolish. Know your strengths. Empower them and make them stronger. But also acknowledge and accept your weaknesses. Strengthen those that can be strengthened and ask for help and support with those that cannot be. Ignore your weaknesses at your peril.

4. Learn To Trust Your Intuition.

Intuition, that inner knowing that speaks in moments of quiet as well as in moments of great need, can lead us to safety…if we listen and act on it. In the final book we see Harry learning to listen to and trust his intuition more and more. He began to stand firm in his willingness to follow his intuitive “hits” even in the face of disagreement from those around him.

Action is important. Movement is necessary. And, sometimes there is a need to wait. Learning to distinguish between the indecision and paralysis that comes from confusion and the inner guidance encouraging you to wait a bit before making a decision is a critical life skill. And it can only be learned through trial and error. By the end of book 7 Harry had learned to distinguish this difference.

6. A Circle Has No Beginning And No Ending.

We have Luna Lovegood to thank for this one. Luna, in her endearing and magical connection to reality spoke this at a critical moment. It not only allowed them to access the information they needed, it also placed an important concept in Harry’s head that would serve him, and save him, at the end of the book. This is such an important concept to remember. Let’s cut to the chase here. If we think of birth as a beginning and death as an ending it sets up a sense of urgency and a tone of seriousness that we carry through our lives. If we open to the possibility that life is, indeed a circle, with no beginning and no ending, it gives us permission to lighten up and take things a bit less seriously. A lesson many of us can benefit from. Harry did!

Without a doubt Harry and his friends are working it. They are taking action. And throughout the books their actions are rewarded by the appearance of the support, resources and things they need. When you ask, and take action, the Universe always answers. The answer may not always come in the timeframe you would like or the manner that you expect, but if you take action and remain open, your asking is always answered.

8. Hope Is Present Even In The Depths Of Hopelessness.

Harry and his friends experienced plenty of hopelessness. And yet, even in their darkest moments, they could grab onto that tiny thread of hope that illuminated their path. Perhaps because they were still young and not yet tainted by the cloud of “reality” that hovers over most of us older folks, they were able to find hope even in the darkest of moments.


9. That Which You Most Fear Is More Afraid of You.

Throughout the series we have glimpses of the fear that Voldemort feels towards Harry Potter. His inability to understand how Harry lived eats away at him even as he gives the outward appearance of growing in power. The things we fear are even more afraid of us. We know the truth. Our fears don’t. So the next time you find yourself struggling to step through a fear, remember that what you fear, fears you more!

10. Our Thoughts Do Not Determine Our Character, Our Actions Do.

This insightful tidbit comes from the latest movie when Sirius, in his last moments, assures Harry that it is not the thoughts in his head that determine whether he is good or evil, but rather which thoughts he chooses to act on. Our thoughts are very often out of our control. But our actions are always in our control. Which thoughts do you choose to act on? That, more than anything else, determines the quality of your character and your life.

11. The Battle Is Won Or Lost Long Before The Swords (Wands) Are Crossed.

This is a concept I learned long ago in my karate training. The Dojo is a reflection of the world. The way you train, the intensity and focus you bring to the Dojo, determines the results you will have in the “real” world. Harry and his friends in the DA (Dumbledore’s Army) trained as if their lives depended on it. And their lives did depend on it! The Death Eaters, on the other hand, let Voldemort’s apparent invincibility lull them into laziness. And when the time came for the DA to cross wands with the Death Eaters, guess who won.

12. Don’t Wear A Horcrux Around Your Neck!

We all have Horcruxes that we carry around with us. You know what I’m talking about: The wedding ring from a previous marriage, the love letters from an ex-girlfriend, the pink slip from our last job. Any object that ties you to the past qualifies as a Horcrux. These objects keep you from being fully present in the moment. They draw your attention into the past, leaving you with less energy to devote to your present. Scan your life to see if you are carrying around a horcrux. If you are, immediately find yourself a Basilix tooth or Gryffindor’s Sword and destroy it!

When given a choice between trust and doubt, it’s far too easy to choose the latter. Whether conscious or otherwise, most of us slip into a place of mistrust at the slightest trigger. Certainly there are times when a healthy dose of caution is warranted, but in many cases our lack of trust keeps potentially helpful people at a distance. Often these are people who would otherwise be able to assist us in the manifestation of our desires. Harry learned this lesson when he discovered the truth about Snape. (See 14 below).

14. Perception Is Not Always An Accurate Reflection of Reality.

There were so many examples of this throughout the series. But the most obvious example comes at the end when Harry discovers the truth about Snape. Our perceptions and beliefs about the world around us usually have very little in common with what is true. Don’t always trust YOUR reality. Remember that everyone has their own personal reality and most of them probably don’t match yours.

15. Know What You Are Fighting For.

Harry and his friends were fighting not just for their own lives, but for the lives of their loved ones, for their world and their way of life. Their fight was a means to an end. And that end was a powerful, driving force that fueled them in the battle. For Voldemort the battle was the end. There was nothing beyond it and no fuel beyond his lust for power. Do you know what you are fighting for? Is there an end beyond your daily grind that fuels you to keep going?

16. Love Is More Powerful Than Fear

Voldemort’s power is based on fear. He controls his Death Eaters with fear. But while fear may, for a short time, control and motivate people to act, ultimately that control breaks down. The force that connects Harry and his friends is Love. Their love for one another binds them together into a cohesive whole that is far more powerful than the fear-filled and isolated soldiers that Voldemort has assembled. Harry and his friends are fighting for love and it is love that gives them the courage and strength to overcome the raw force of Voldemort and his minions.

So there you have it: 16 personal development lessons from Harry Potter.
I know there are quite a few more. If you have one, leave it below in the comments.